Opera House Ops: Episode 2 – Morelville Men’s Club is out as of last night. For those actually buying the episode, it’s been available via pre-order all week. 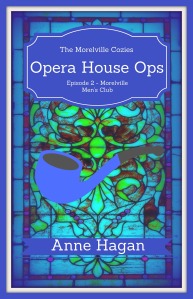 The synopsis for this episode:

The real culprits of the opera house break-ins get a dose of death to scare them off their game. The question is, who’s the corpse and how did he die?

You can buy it now at Amazon.

In other news, I’ve been hard at work writing a follow up to my lesfic romance novel, Broken Women. For some readers, the ending to the story of Barb and Janet just wasn’t quite as satisfying as they would have liked. Guess what? That wasn’t the end. It was a story that couldn’t be told in one book so it was never my intention to leave anyone hanging. There’s more…lots more!

The sequel is titled, ‘Healing Embrace’. That title comes courtesy of Angela Turnerwray who suggested it in a little challenge I posted to a Facebook group, Angela wins credit in the book for suggesting the title and a copy of it in her choice of format. Look for the book in late September.

I'm an East Central Ohio based government employee by day and a fiction author by night. I specialize in mystery fiction featuring lesbian sleuths and cozy fiction featuring women sleuths. I also dabble in romance especially romantic lesfic. I live with my wife and our dogs in a tiny town that’s even smaller than the Morelville of my first fiction series and we wouldn't have it any other way. My wife grew up here and she has always called this little village home. Though it’s an ultra-conservative rural community, we're surrounded here by family, longtime friends and many other wonderful people with open hearts and minds. My wife and I are the co-owners of a commercial haunted house: Hagan's House of Horrors. Much as my dream has always been to write fiction, hers has been to create it through the medium of horror. We went full commercial in 2015. Watch us as we grow!
View all posts by Anne Hagan →
This entry was posted in Books, Healing Embrace, Opera House Ops and tagged Book, Books, broken women, Healing Embrace, house, Morelville, Morelville Cozies, Opera, Ops, Romance. Bookmark the permalink.