Relic was the first book ‘off the presses’ so to speak, in the Morelville Mysteries series. Quite frankly, I hadn’t found a decent proof reader yet when it was published and some of the early reviews for the book reflect that. All along, I’ve made corrections to it, here and there, as they’ve been pointed, out but I finally buckled down over the past week and did a much needed review of the book myself. It’s amazing the errors you catch when you’re a year+ removed from them!

Now, I’m not saying Relic is now perfect. Far from it. As my first published effort, I’m quite proud of it but, going back through it now, I can see what a good editor would have seen if I could have afforded one at the time I wrote it…there are quite a few instances of ‘telling’ rather than ‘showing’, the bane of every writer. I stand by the book – as most authors do with their firstborn – but I’d like to think I’ve improved as a writer as I’ve gone along. 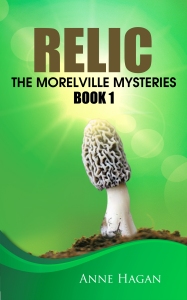 Edition 2 is now available at Amazon and I’ve dropped the price. For the time being, this gateway book to the Mel and Dana driven mystery series will be just $.99. Over the next couple of weeks, you can look for it to be available for the Nook, on the Kobo site and at other internet retailers. It’s no longer available via Kindle Unlimited, except as part of the Morelville Collection boxed set.

Going wide with books in my original series was one of the goals I set for myself this year. There’s been demand from Nook owners and I’ve been contacted by Canadian readers that much prefer Kobo to Amazon. It’s never good to put all you eggs in one basket so I’m going to give the rest of the internet publishing world a shot.

By the end of this year, I plan to have a stand alone lesfic romance novel out that involves two characters from this series that were introduced in later books and two more entries into the Morelville Cozies Mystery series that started with the November 2015 release of The Passed Prop. Those will all be available exclusively at Amazon and via Kindle Unlimited. 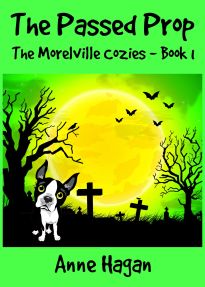 Once books two and three in that series are ready for publication, this one will likely get a cover redesign. Though I liked this colorful one a family friend did and it is representative of the story, it doesn’t have the pull a more ‘adult’ cozy mystery cover – or any mystery cover – would have (an author’s way of saying that it isn’t selling). Those who’ve read the story have told me they enjoyed it which leads me to believe the cover may be the reason there have been so few readers. What do you think? Do you like it, yes or no?

I'm an East Central Ohio based government employee by day and a fiction author by night. I specialize in mystery fiction featuring lesbian sleuths and cozy fiction featuring women sleuths. I also dabble in romance especially romantic lesfic. I live with my wife and our dogs in a tiny town that’s even smaller than the Morelville of my first fiction series and we wouldn't have it any other way. My wife grew up here and she has always called this little village home. Though it’s an ultra-conservative rural community, we're surrounded here by family, longtime friends and many other wonderful people with open hearts and minds. My wife and I are the co-owners of a commercial haunted house: Hagan's House of Horrors. Much as my dream has always been to write fiction, hers has been to create it through the medium of horror. We went full commercial in 2015. Watch us as we grow!
View all posts by Anne Hagan →
This entry was posted in Books, Relic, The Passed Prop and tagged Cozy, Kindle, Kindle Unlimited, Morelville, Mysteries, Mystery, Nook, Relic, The Passed Prop. Bookmark the permalink.