Quoting The Beatles – In My Life

Someone posted this on Facebook yesterday and it gave me a little pause: 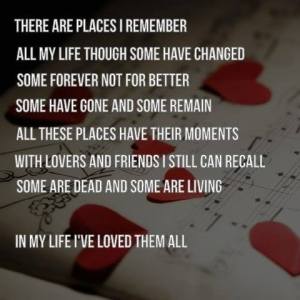 The words are the first two verses from the Beatles song, ‘In My Life’ (though it’s often referred to as ‘There Are Places I Remember’) written by Paul McCartney and John Lennon.

I have to admit, I was pretty young when the Beatles were still in their heyday. I honestly don’t remember this song which came out on their ‘Rubber Soul‘ album slightly before I was born which is actually surprising to me because it’s ranked 23rd on Rolling Stone’s top 500 songs of all time and it’s considered by many to be one of the top 5 or 10 Beatles songs of all time.

I’ve had some reasons to reflect recently and those few lines brought some vivid memories of  times and places back. Out of curiosity, I looked up the full lyrics for the song and I listened to a couple of audio clips.

There are a few more verses:

In my life I love you more”

What meant one thing when I saw the snippet on Facebook came to mean so much more when I read the rest of the lyrics and listened to the song being performed. It’s a great song. It deserves its place in the pantheon of the top songs of all time. I’m just sorry I never heard it before.

I'm an East Central Ohio based government employee by day and a fiction author by night. I specialize in mystery fiction featuring lesbian sleuths and cozy fiction featuring women sleuths. I also dabble in romance especially romantic lesfic. I live with my wife and our dogs in a tiny town that’s even smaller than the Morelville of my first fiction series and we wouldn't have it any other way. My wife grew up here and she has always called this little village home. Though it’s an ultra-conservative rural community, we're surrounded here by family, longtime friends and many other wonderful people with open hearts and minds. My wife and I are the co-owners of a commercial haunted house: Hagan's House of Horrors. Much as my dream has always been to write fiction, hers has been to create it through the medium of horror. We went full commercial in 2015. Watch us as we grow!
View all posts by Anne Hagan →
This entry was posted in Musings and tagged Beatles, In My Life, memories, Rubber Soul, The Beatles, There are places I remember. Bookmark the permalink.